What is a Whippet?

According to Wikipedia, the Whippet (also English Whippet or Snap dog) is a dog breed of medium-size. They are a sighthound breed that originated in England, where they descended from greyhounds. Whippets today still strongly resemble a smaller greyhound. Shown in the Hound group, Whippets have relatively few health problems other than arrhythmia. Whippets also participate in dog sports such as lure coursing, agility, and flyball. The name is derived from an early 17th-century word, now obsolete, meaning "to move briskly".

Whippets were originally greyhounds that were deemed unsuitable for hunting because of their size. They were returned to their peasant breeders after being maimed so that they could not be used to hunt and break the forest law. These maimed dogs were bred together and used to catch rats, and hunt rabbits. When the forest law was repealed, these "miniature greyhounds" became popular in the sport of dog racing. This has led to Whippets being described as "the poor man's racehorse." They are still frequently used as racing dogs today, as they have the highest running speed of breeds their weight: 35 miles per hour (56 km/h) and even challenge greyhounds for top speed. Whippets are, however, the fastest accelerating dog in the world.


The original whippets were thought to be English Greyhounds that were too small for stag hunting in the forests of England. These dogs were frequently returned to their breeders, who were usually peasants and as such could not own hunting dogs under the forest law. Because of this, dogs returned to them were maimed, usually by cutting a tendon in a leg or removing the toes on one paw. The breeders kept these dogs and continued to breed them, producing a smaller version of a greyhound that was suited for rat catching and hunting hares and rabbits. When the forest law was repealed, the "small greyhounds" became immensely popular. Whippets were then commonly known as "snap dogs" for their tendency to "snap up" nearby prey. There is a 1758 painting by Pompeo Batoni entitled Portrait of Charles Compton, 7th Earl of Northampton which features a whippet-like dog. 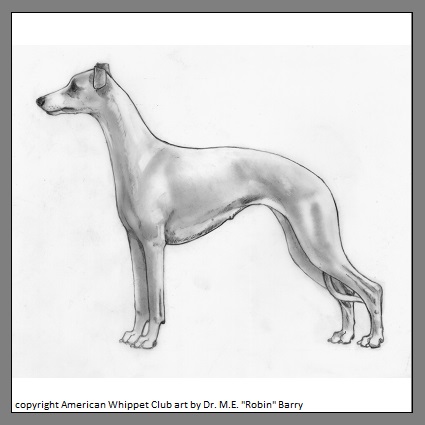 So What is a Whippet Supposed to Look Like?


If you are reading this, you may think you know what a whippet is supposed to look like. Long nose, long legs, elegant...I mean, how difficult can it be, right? The truth is, what makes a whippet is a lot more than that. Whippets, like all pure breed dogs, are bred to a written standard. Without these breed standards, a person could say a dog was any breed they wanted it to be. The breed standard sets, in writing, all the details of each part of the dog and how they are supposed to look, disqualifying points, and even the breeds temperment. Breeders then choose from their litters which puppy or puppies they will move forward with in order for each generation to be closer to the standard than the generation before.

You can find whippets all over the world. Whippets in different countries may vary slightly as there are several whippet breed standards throughout the world. In general they may look the same, but to a knowledable person, there can be quite noticable differences. 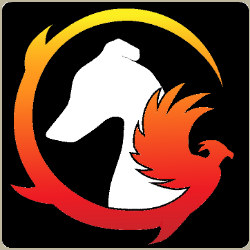